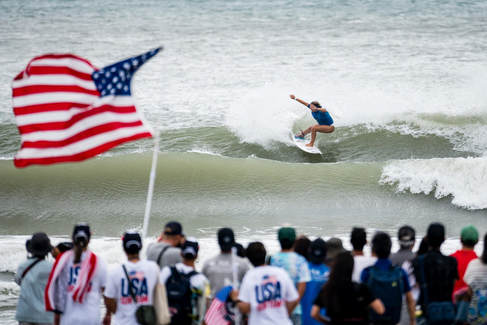 ​Your Guide to Watching Surfing

Surfing will make its debut at the Olympic Games Tokyo 2020, introducing an exceptionally beautiful and athletically demanding sport to new audiences.

Having the sport of surfing included in the Olympics is an exciting moment for surfing and the world of sport. USA Surfing CEO Greg Cruse said the Olympic Games Tokyo 2020 will be a “game-changing moment” for the sport's athletes “to represent their countries and compete on the world’s greatest sporting stage and natural wonder – the ocean.”

Cruse said an Olympic gold medal will represent a pinnacle of achievement for surf athletes with more national and worldwide attention than surfing has ever known.

Now is a great time to get up to speed on the sport of surfing and maybe even give it a try. Here’s what you need to know:

WHO
A total of 40 surfers will compete in the Olympic Games Tokyo 2020. These athletes will qualify based on 2019 World Surf League standings and performances at ISA World Surfing Games and Pan American Games. Read more on the qualification system here. Each nation’s team will have a maximum of four surfers – two women and two men. Olympic gold, silver and bronze medals will be awarded in the individual men and women’s categories.

USA Surfing became the National Governing Body for surfing in the Olympics in 2017 and is creating a high-performance path to the Olympic stage and cultivating the next generations of talent.

WSL pro and Olympic hopeful Courtney Conlogue says she can’t wait to see surfers walking in the parade of nations with the five rings on Team USA’s uniforms.  “The Olympics for me is just such an amazing experience where so many sports are just respected,” Conlogue said on The Surf Channel. “It is such a beautiful sport to watch and I think it is important to share it on the Olympic stage.”

WHAT
It is not yet known what format the Olympic surf competition will take. The International Surfing Association (ISA) will control the Olympic judging criteria and panels. Based on current international competition, the competition will be decided based on rounds of heats with between two to four surfers. There are typically quarterfinal and semifinal rounds. The top finishers advance to one-on-one heats that determine the winner.

The ISA World Surfing Games – now an Olympic qualifying competition uses double elimination rounds. There are initial heats for men and women, in which the first and second place winners automatically continue to the next round while the third and fourth place surfers move over to the repechage heats that provide a second chance to get back into the finals. In repechage, the first and second place winners move on to the finals.

A panel of judges (usually between five to seven) score each surfer’s performance using a scale of one to 10.

Performance on the wave is currently based on criteria including degree of difficulty, speed, power, flow, and the combination of major maneuvers performed. For more information, read this list of surf tricks and maneuvers.

Surf competitors wear different colored jerseys to help the judges distinguish the athletes. A color-coded electronic board indicates to surfers which color jersey has the first right to take any wave of their choosing. This priority system determines which surfer’s turn it is to have first priority to take off on a wave. Surfers are given interference penalties if they don’t follow rules of priority.

WHERE
The 2020 Olympic surfing competition will be held at Tsurigasaki Beach in Chiba – about 40 minutes outside Tokyo. USA Surfing’s official forecasting partner Surfline has been watching weather and wave patterns that bode well for good conditions during the late July window of 2020.

WHEN
With the help of Surfline, leaders from the International Surfing Association and International Olympic Committee will identify the dates with the best conditions to run the Olympic surfing games.  A 16-day window (July 24 – August 9) is being held to determine the best days to hold the surf competition. The contest could be compressed into two-and-a-half days, but ideally will run over four days.
*A more interactive version of this guide can be found on Medium.
USA Surfing is recognized by the International Surfing Association (ISA). The ISA is recognized by the International Olympic Committee (IOC) as the World Governing Authority for Surfing, Stand Up Paddling, Prone Paddling, Bodyboarding, and Surfriding.
Copyright © 2022 USA Surfing. All rights reserved.